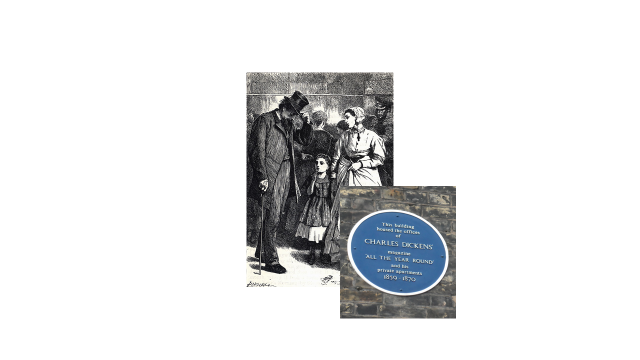 2020 marks the 150th anniversary of the death of Charles Dickens and inevitably sends us back to consider his activities in those last years of his life. Two major novels were written (Great Expectations serialised in 1860-1, and Our Mutual Friend in 1864-5) and a third, The Mystery of Edwin Drood (1870), begun but never completed. Dickens’s phenomenally-successful public readings from his own works continued to be presented on tours around the United Kingdom and, in 1867-8, the United States, with a final tour in 1868-70. From 1859 he ‘conducted’ the second of his weekly journals, All the Year Round which in many ways contin-ued the approach of its predecessor, Household Words,
There were new developments too. Dickens introduced, in January 1860, a series of articles with a central narrator-figure called The Uncommercial Traveller, working for the firm of Human Interest Brothers. This persona for Dickens himself deals with topics of the day close to his heart and created some of the finest examples of the periodical essay in the language: in them he reaches the summit of his achievement in this kind of writing: observant, reflective, with a sensitive touch on the times, he can also be satirical, comic, campaigning: all the moods we constant-ly find in him. The Uncommercial Traveller essays amount to thirty-seven different papers published between 1860 and 1869: they span the final years of their crea-tor’s life. Dickens had confidence in them: they were the first pieces of journalism he advertised under his own name. They were collected and published at various times as a collection.

What they offer is a complex, mature method of narrating the material: a mixture of fact and imagination, sometimes drawing on direct experience, sometimes offering more fanciful approaches. For Dickens, they had the advantage of keeping him before the public eye in the pages of his journal when he was not engaged in pub-lishing a full-scale novel or directly in contact with the public by means of the public readings.

Dr. Tony Williams is Associate Editor of The Dickensian and a frequent speaker on Dickensian topics. He was President of the International Dickens Fellowship from 2015 to 2017 and has served the Fellowship in various capacities, including Joint General Secretary from 1999 to 2006, at which time he was also a Trustee of the Charles Dickens Museum in London, where he is now an Honorary Academic Advisor. He is an Honorary Senior Research Fellow in the School of Humanities at the University of Buckingham. Dr. Williams taught English in UK secondary schools from 1969 to 1997.
In 2009 he acted as consultant for Charles Dickens’s England, produced by
Guerilla Films, featuring Derek Jacobi. He has co-authored (with Alex Werner) Dickens’s Victorian London, published in 2011 to accompany the Museum of Lon-don’s bi-centenary exhibition “Dickens and London”. He recently contributed a chapter on ‘Dickens as a Public Figure’ to The Oxford Handbook of Charles Dickens (2018).