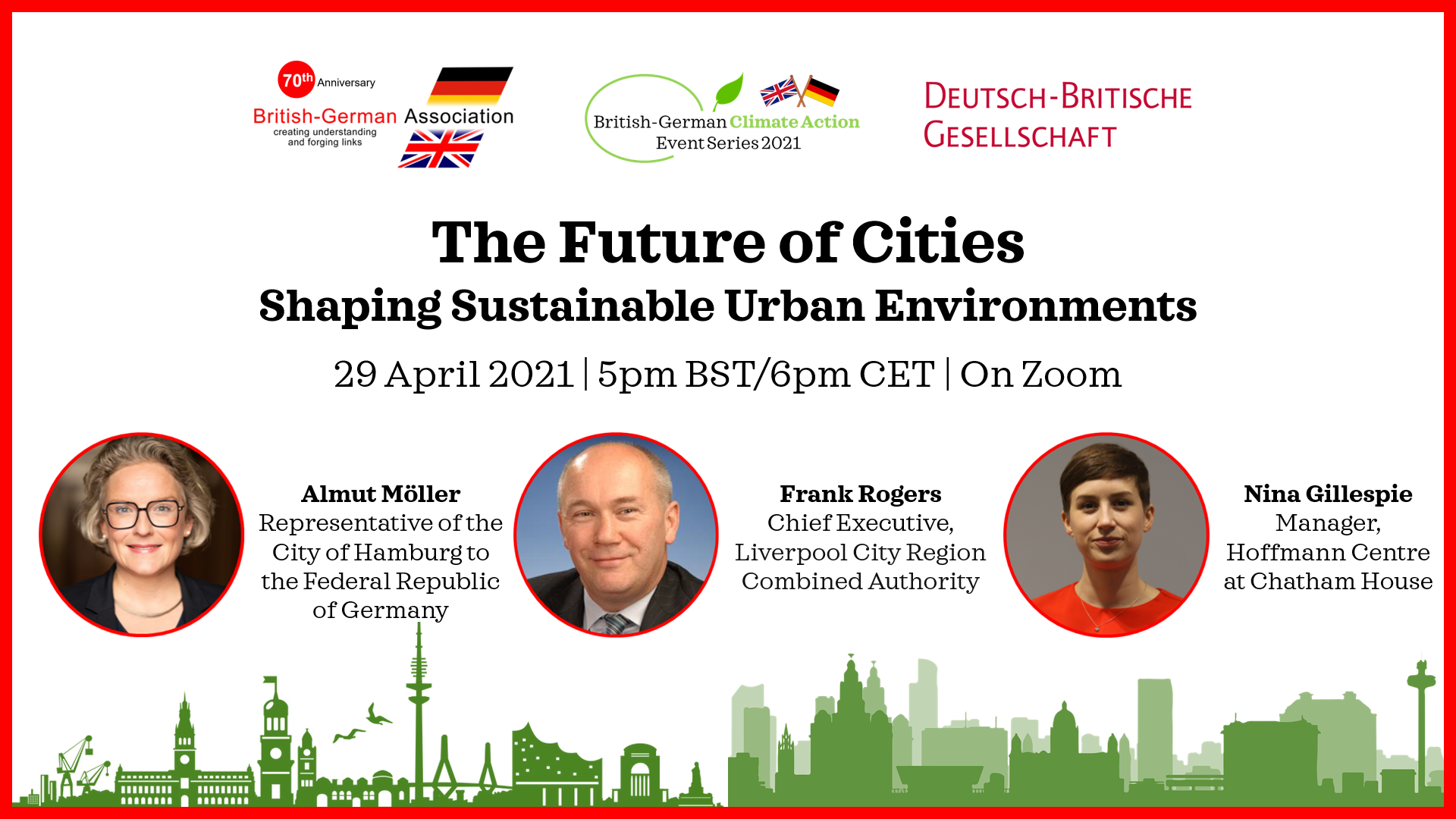 Join us on 29 April at 5pm BST/6pm CET on Zoom for a discussion between Almut Möller, Representative of the City of Hamburg to the Federal Republic of Germany, and Frank Rogers, Chief Executive of the Liverpool City Region Combined Authority, on Shaping Sustainable Urban Environments. The discussion will be moderated by Nina Gillespie, Centre Manager at the Hoffmann Centre for Sustainable Resource Economy at Chatham House.

This event is the first in our British-German Climate Action Event Series 2021, organised jointly by the British-German Association (BGA) and the Deutsch-Britische Gesellschaft.
Please note that registration is necessary in order to join the event. You can register below.

Almut Möller studied Political Science, Constitutional Law, and Modern and Contemporary History at the Universities of Münster, Aix-en-Provence (France) and Munich, and graduated with a Master of Arts in 2002. Between 2002 and 2008, Almut was a Research Associate at the Centre for Applied Policy Research (CAP) at the LMU University of Munich, and undertook research stays at the Renmin University of China (Peking), the Al Ahram Center for Political and Strategic Studies (Cairo), and the American Institute for Contemporary German Studies (AICGS) at the Johns Hopkins University in Washington, D.C. She subsequently worked for two years in London as an independent publicist and analyst.
In 2010, Almut was appointed Head of the Alfred von Oppenheim Center for European Policy Studies at the German Council on Foreign Relations (DGAP e.V.) in Berlin. From 2015 to 2019, she was Head of the European Council on Foreign Relations (ECFR). Almut Möller currently holds the position of Representative of the City of Hamburg to the Federal Republic of Germany, to the European Union, and for Foreign Affairs.

Frank Rogers was appointed Chief Executive of the Liverpool City Region Combined Authority in November 2018, having previously taken up the position of Interim Head of Paid Service following the election of Steve Rotheram as Metro Mayor in May 2017. Frank oversees the Combined Authority’s work across a range of key policy areas including transport, strategic investment, housing, employment, and skills.
A Chartered Civil Engineer by profession, Frank had worked for many years in the UK construction industry on the development, design, construction, and maintenance of a diverse range of multi- disciplinary projects, including the Channel Tunnel and London Underground projects.
Frank joined Merseytravel in August 2006 as General Manager at Mersey Tunnels. In September 2009, he was appointed to Director of Customer Services, and in June 2013, he took up the role of Director of Integrated Transport Services and Deputy Chief Executive.
In October 2015, Frank was appointed as Merseytravel’s Interim Chief Executive, being confirmed in the permanent dual role of Chief Executive and Director General in February 2017, before taking up his current dual role leading the Combined Authority and Merseytravel.

Nina Gillespie is Manager for Chatham House’s Hoffmann Centre for Sustainable Resource Economy, overseeing the Centre’s operations and engagement strategies, and investigating ideas to shift consumption onto more sustainable pathways. Prior to Chatham House, Nina was a Strategic Project Officer for Sustrans, where she led various projects to accelerate the uptake of active and sustainable travel within the urban environment. She also worked as a part of the European Green Capital 2015 Programme to lead the development of a vision for Bristol, UK, to become a ‘liveable’ city through sustainable transport and urban planning.
Previously, Nina supported the development of campaign strategies and behaviour change programmes for environmental advocacy organisations in both the US and the UK. Nina holds an MSc in Sociology and Global Change from the University of Edinburgh and a BA in History from the University of Exeter.