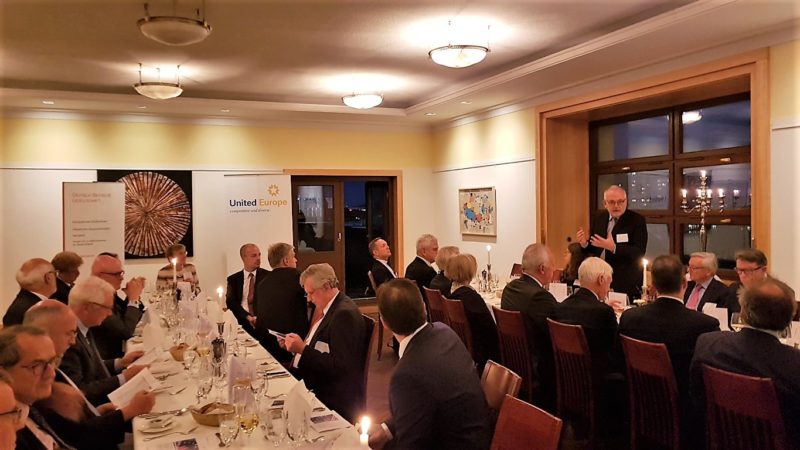 On Monday, October 22, about 40 representatives from business, politics and academia discussed main challenges and opportunities the EU will be facing after Brexit. Participants included Elmar Brok (European Parliament), Daniel Lacalle (Commissioner of the Madrid Region in London), Lord Malloch-Brown (Eurasia Group/International Crisis Group), Lord Mandelson (Global Counsel), Rainer Ohler (Airbus), Wolfgang Schüssel (United Europe), Ambassador Petra Sorg (Federal Foreign Ministry) and Rupert Graf Strachwitz (German-British Society). The discussion (under Chatham House rules) was moderated by Judy Dempsey (Carnegie Europe) and took place two days after the “People’s Vote” march in London where a crowd of over 700.000 demonstrated against the UK leaving the EU, calling for a second referendum.
A growing number of British politicians are equally starting to call for a ‘people’s vote’, meanwhile more and more British and European companies are starting to implement their adaptation plans because of the looming Brexit date of March 29, 2019.

While Ireland is preparing for a hard Brexit, companies and associations such as the BDI (Federation of German Industries) are appealing for the need for a longer transition phase for Britain’s exit from the EU. Also, as the EU is built on liberal and social values, as well as on peaceful cooperation, what will happen to these values once the UK leaves? Will they be obsolete?

With upcoming EU parliamentary elections in May 2019, the EU is gearing up for the next major term in the European political cycle, which might well be a bigger issue and challenge than Brexit itself. Not least in this context, the alienation of Eastern European governments is a very serious problem for the EU.
Brexit could be seen as the particular British manifestation of a much wider European malaise. It’s the protest of a societal group that feels left behind economically and pressured by globalisation.

One question in the discussion was whether the unity of Europe might be easier to maintain if its activities are more defensive, i.e. focused on a common adversary, and whether European cohesion is strong enough also when it comes to pro-actively adapting its structure and vision towards the future. In the case of future relations with Britain, the focus again is essentially on defence, namely of a level market playing field to reduce the risk of legislative arbitrage for British companies.

In terms of technology development and according skills, it was felt the EU has fallen immensely behind the US and Asia. The potential loss of the British university and technology ecosystem as we know it now, due to more painful Brexit people movement rules and regulations, will further damage the EU’s reputation and positioning in this global competition. The EU must catch up with China and invest in Artificial Intelligence. But there is another sector, where the EU is already far behind: electric vehicles, biotechnology, high-speed internet, to name but a few – these and other sectors are simply not competitive enough in this global race.

People’s trust in established parties is decreasing; citizens are turning away from mainstream ideas and centre ground ideals and move more to the extremes, because they don’t believe in the fair outcome of established rules any more or that established politicians look after their interests. If recent election results are to be replicated in the next European parliament elections, this would leave parliament much more fragmented.

The next five year-political cycle in Europe will be exceptionally challenging, with likely more economic uncertainty and serious trade constraints. Under these circumstances the EU needs leadership with a much more questioning and revisionist attitude, being able to demonstrate a real capacity for reinvention and future focussed adaptation.
But there is another side to Brexit, that of EU opportunity: Since the UK is no longer sitting at the EU table and cannot interferes in the negotiations decision-making process, the EU has now made more progress in than in the last 10 years before the Brexit referendum.

The opinion was also expressed that Brexit could and should be used as an opportunity to strengthen the EU as an area of freedom, flexibility, attractive investment opportunities and global trade. The assumption has even been made that UK investment into the EU will not likely be reduced due to Brexit, but might even increase, given the opportunities to develop activities within the EU and the need to move parts of some businesses abroad. Despite an expected period of maximum uncertainty, though more on the UK side, there is also an enormous opportunity for the EU27 coming out of the negotiations, namely a new drive to reduce bureaucracy and attract investment and capital, to strengthen freedom, flexibility, and boost global trade. The EU has a tremendously powerful economy and can become a world leader in trade, growth, employment and attracting FDI, with or without the UK.

Brexit had an obvious positive effect on the cohesion of the remaining EU member states: After the UK decision to leave, the EU’s approval ratings have risen among the population in all member states. In Poland 80 % of the people now want to stay in the EU. But challenges remain: the EU currently has no clear strategy of how to deal with Russia and it will be interesting to see which European country or countries might take the place of the UK.
The EU was built as a peace project; but in the meantime it’s become more of a project about power in the world, about competitiveness vis-à-vis a fast growing China and US. For Europeans to protect their interests and values against a more assertive US and China, they have to organise themselves better and more forcefully and actively defend these interests.

Nobody knows how the negotiations will end – if we will get a hard or soft Brexit. Certainly the EU will look different after the withdrawal of the UK. The EU now has an opportunity and chance to reorganise itself and build a new, stronger basis. Despite massive demonstrations in the UK against Brexit, the chance for a second referendum is almost zero. From April next year Britain and the EU have to learn to live and trade under new conditions.

The event was hosted by United Europe and took place in cooperation with the German-British Society in the International Club of the Federal Foreign Ministry in Berlin.