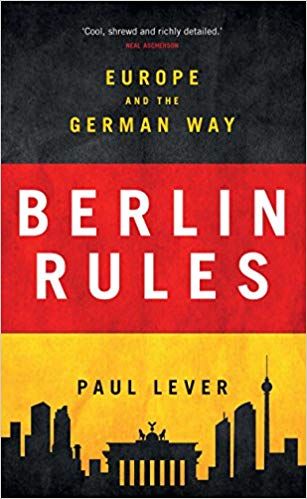 In this book Sir Paul, a former British Ambassador in Berlin, examines the leading role which Germany now plays in the European Union.

He shows how the country’s history has influenced its economic and political structures as well as the policies which it pursues in Europe. He describes some of the challenges which Germany and the EU will face over the coming years and speculates on how a German-led Europe is likely to develop.

In a joint event with the Centre for British Studies, Humboldt-Universität zu Berlin and the German-British Society Sir Paul will elaborate on his view of Germany’s role and comment on the most recent developments since the publication of the revised edition of his book in September 2018.

He will be introduced by Prof Dr Gesa Stedman, Centre for British Studies. Rupert Graf Strachwitz will chair the event.

Sir Paul Lever is Chairman of the Advisory Board of the Centre for British Studies at the Humboldt University in Berlin.
From 1966 until 2003 he was a member of the Diplomatic Service specialising in politico-military and European issues. He served in Helsinki, at the United Kingdom Delegation to NATO, at the European Commission and as Leader of the United Kingdom Delegation to the Negotiations on Conventional Forces in Europe. His later postings were as Head of the Overseas and Defence Secretariat in the Cabinet Office and Chairman of the Joint Intelligence Committee; EU and Economic Director in the Foreign Office; and from 1997 to 2003 Ambassador to Germany.
From 2004 to 2009 he was Chairman of the Royal United Services Institute. From 2003 to 2006 he was a senior advisor to Thames Water and from 2007 to 2012 a Non-Executive Director of Sellafield Ltd. He has an honorary doctorate from Birmingham University and is an honorary fellow of The Queen’s College, Oxford.