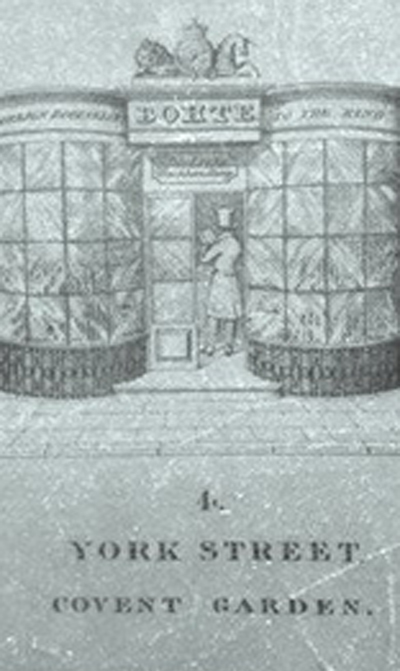 On Saturday, 4 December 1820 a certain Catherine Salmon called at a bookshop at No. 4, York Street, Covent Garden. She asked the assistant behind the counter if the bookseller would be interested in buying a set of old German books, and provided a brief description. The assistant at first replied in the negative, but then, recalling something about books answering Salmon’s rough description, suggested she return the following Monday.
So began the case of Mrs Schroder’s Luther, a sorry tale linking the German bookseller Johann Heinrich Bohte, “Foreign Bookseller to the King”, the Schroders, a respectable German family long resident in England, and some rather seedy people from London’s criminal underworld.
J. H. Bohte, who had been born in Bremen, had opened his Covent Garden bookshop in 1813. Within a few years he had established himself as the leading purveyor of German books in London. At the same time he was active importing English books to Germany through the Leipzig Book Fair. He was also embedded in the early Romantic literary world, in contact with such luminaries as Goethe and Samuel Taylor Coleridge – and Thomas de Quincey, who wrote his book Confessions of an English opium eater while lodging behind Bohte’s shop.
In this lecture, I’ll tell you something about the background to the story of Mrs Schroder and her Luther, try to unravel the case, and of course reveal what happened next. We’ll meet a cast of colourful characters – but we’ll also learn something about Bohte’s life and business, and a largely forgotten Anglo-German world some two hundred years ago.
Graham Jefcoate