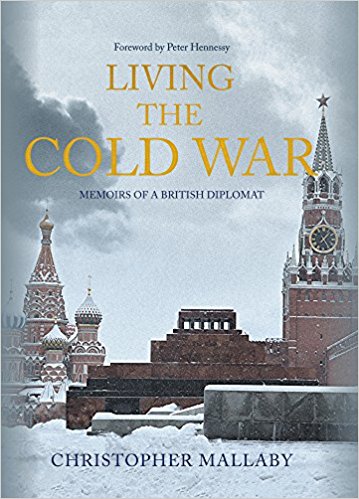 In October 2017 Sir Christopher Mallaby’s book „Living the Cold War: Memoirs of a British Diplomat” was published. One centrepiece of his memoir is Sir Christopher’s years in Bonn where he served as Ambassador to Germany from March 1988 to December 1992. Being Ambassador in Germany during the Fall of the Berlin Wall and serving in Moscow during the Cuba crisis and again in the mid 1970s it is not surprising that the Cold War is one of the central themes of Sir Christopher’s diplomatic life. He witnessed Khrushchev banging his shoe on the desk at the United Nations General Assembly and was in Moscow during the Cuban Missile Crisis, kept awake by the possibility of death from a US nuclear missile strike.

In a joint event with the Centre for British Studies, Humboldt-Universität zu Berlin and the German-British Society Sir Christopher will tell us about his periods in Germany and Moscow and above all how he witnessed the events of 1989/1990.

Sir Christopher Mallaby GCMG GCVO was educated at Eton, Cambridge University and the Harvard Business School. He was in the British Diplomatic Service from 1959 to 1996. He worked in the British Embassy in Moscow in the early 1960s and again in the mid- 1970s. From 1982 to 1985 he was Minister in the British Embassy in Bonn. From 1985 to 1988 he was Deputy Secretary of Margaret Thatcher’s Cabinet. He was Ambassador to Germany from March 1988 to December 1992 and to France from January 1993 to July 1996. Since then his work has included: Managing Director in UBS Investment Bank, Trustee of Tate Galleries when Tate Modern was created, Chair of the Somerset House Trust, Vice Chairman of the Thomson Reuters Founder’s Share Company, Supervisory Board of Vodafone Germany. From 2000 to 2014 he was executive Chairman of the Charitable Trust which supports the European Organisation for Research and Treatment of Cancer in Brussels. From 2010 to 2018 he was Chairman of the Advisory Board of the 20/21 British Art Fair, held annually in London.
Sir Christopher married Pascale Thierry-Mieg in 1961. Together they have four children and thirteen grandchildren and live in Westminster, London and south west France.