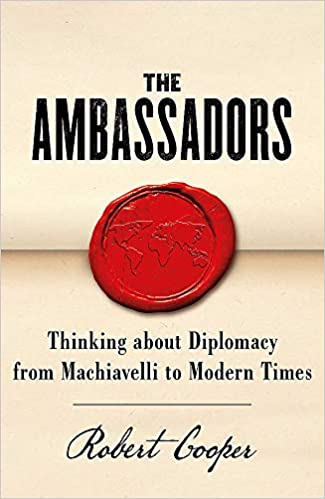 History does not run in straight lines. It is made by men and women and by accident. The path of events and ideas does not stretch smoothly from Thucydides, through Machiavelli and thence to perpetual peace. Instead of inevitable progress, what we get is more often false starts, blind alleys, random events, good intentions that go wrong. This is therefore not a continuous diplomatic history. Richelieu and Mazarin inhabited a world we can hardly imagine today; but it is from their time that we can begin to see the outline of today’s Europe. Talleyrand and the Congress of Vienna in 1815 take us closer to the present day. Talleyrand was a man of the ancien regime; but he was the first European statesman to see America. It is at this Congress that, for the first time, a humanitarian question – the slave trade – was discussed. Humanitarian issues have formed part of the diplomatic agenda ever since.

Robert Cooper’s incisive and elegantly written book includes a brilliant analysis of the people who built the Western side of the Cold War. The high point of the drama was the Cuban Missile Crisis, with its contrast between the open debate that John F. Kennedy used to help him make decisions and the closed system in Moscow. Henry Kissinger is a pivotal figure in the post-war world, as well as one of the great writers on diplomacy. His story is in some ways typical: he failed in his most important aims, and succeeded in ways he never expected. Meanwhile a notable and neglected success story is that of German diplomacy in the last half-century.

Robert Cooper’s masterly The Ambassadors pieces together history and considers the fragments it leaves behind. It is these fragments that prove so illuminating.

The event will be chaired by Rupert Graf Strachwitz, Vice Chairman, Deutsch-Britische Gesellschaft.

Robert Cooper grew up in Nairobi, Kenya. He was educated at Oxford and the University of Pennsylvania and served in HM Diplomatic Service including in Tokyo, Bonn (Minister); as Head of Policy Planning 1989-93; as Deputy Secretary to Cabinet for Foreign & Security Policy; as Director General in EU Council Secretariat, under Javier Solana and Catherine Ashton.
Publications: The Breaking of Nations – Order & Chaos in the 21st Century (Orwell Prize) 2002, The Ambassadors – Thinking about Diplomacy from Machiavelli to Modern Times, 2021.