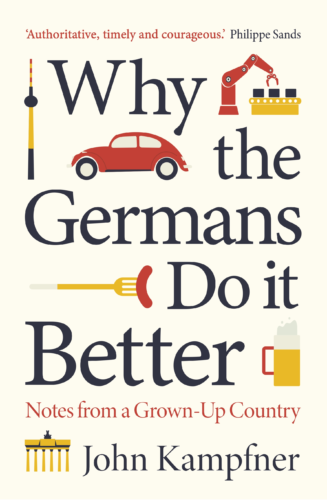 John Kampfner in conversation with Lord Green of Hurstpierpoint

‘A fine new book… One of the best English-language introductions in recent years to modern Germany and its politics: thoughtful, deeply reported and impeccably even-handed.’ Oliver Moody, The Times

‘A rich guide to modern Germany… Excellent […] For the British readers this book is directed at, the implied contrasts are startling. German conservatism produced Angela Merkel, easily the most respected democratic leader in the world, while the English variety produced Boris Johnson.’ David Edgerton, Guardian

From a German point of view, hearing a book title like the one above might make one feel slightly uncomfortable. Nevertheless, the question “Why can’t we do it like the Germans?” could be heard often in the UK in recent months, not least when the question of contact tracing and personal protective equipment (PPE) came up in discussions around the government’s handling of the COVID-19 pandemic.

John Kampfner has been thinking about Germany for much longer than since this year. Mixing personal journey and anecdote with compelling empirical evidence, “Why the Germans Do It Better” is a searching and entertaining exploration of the country many in the West still love to hate, as per the blurb of the book. Raising important questions for our post-Brexit landscape, Kampfner asks why Germany has become a model for others to emulate, while Britain still languishes in wartime nostalgia and fails to tackle contemporary challenges. Part memoir, part history, part travelogue, Why the Germans Do It Better is a rich and witty portrait of an eternally fascinating country.

John will be discussing his arguments with Stephen Green, whose book “Reluctant Meister – How Germany’s Past is Shaping its European Future”, published in 2014, dealt with topics.
The conversation will be chaired by Rupert Graf Strachwitz, Vice Chairman Deutsch-Britische Gesellschaft.

As you all realize we still cannot do any “real” events at the moment. But we did feel quite strongly that we cannot just go on waiting for the Covid-19 crisis to pass over. More Zoom events will follow.
If you are on the internet, there should be nor problem to log in to the Zoom system.

John Kampfner has had a 25-year career in international public life – spanning media, global affairs, UK politics, education, business, arts and the third sector.
He began his journalistic career as a foreign correspondent with the Daily Telegraph, first in East Berlin where he reported on the fall of the Wall and unification of Germany, and then in Moscow at the time of the collapse of Soviet Communism. He went on to become Chief Political Correspondent at the FT and political commentator for the BBC’s Today programme and Newsnight. As Editor of the New Statesman from 2005 to 2008, he took the magazine to 30-year circulation highs. He was Society of Magazine Editors Current Affairs Editor of the Year in 2006.
He now writes weekly for the Times and appears regularly in other newspapers such as the FT, Guardian and New European. He frequently appears on the BBC and Sky. He has made a number of programmes for BBC Radio 4. His most recent, for Analysis in June 2020, asked whether democracies or authoritarians have emerged stronger from Covid-19.
His new book, Why the Germans Do It Better, will be his sixth. It will be published by Atlantic on August 27. His previous books include the best-selling Blair’s Wars (2003), now a standard text in schools; Freedom For Sale (2009), which was short-listed for the Orwell Prize in 2010 and in 2014 The Rich, from Slaves to Superyachts, A 2000-Year History.

Stephen Green (Lord Green of Hurstpierpoint) was educated at Lancing College, Sussex, and at Oxford University where he graduated in 1969 with a BA (First Class Honours) in Politics, Philosophy and Economics. He also obtained a Masters Degree in Political Science from the Massachusetts Institute of Technology in 1975.
He was created a Life Peer in 2010 and was appointed Minister of State for Trade and Investment in January 2011. He retired from this position in December 2013.
Lord Green began his career in 1970 with the British Government’s Ministry of Overseas Development. In 1977, he joined McKinsey & Co Inc, management consultants, with whom he undertook assignments in Europe, North America and the Middle East.
He joined The Hongkong and Shanghai Banking Corporation in 1982. In 1998, he was appointed to the Board of HSBC Holdings plc as an Executive Director. He became Group Chief Executive in 2003 and Group Chairman 2006. He retired from HSBC in December 2010.
Lord Green was Chairman of the British Bankers’ Association from 2006 to 2010. He also served as a Trustee of the British Museum. He served as a non-executive director of BASF until 2010.
He is Chairman of the Natural History Museum, Chairman of Asia House and President of The Institute of Export and International Trade.
Stephen Green has written six books – Serving God? Serving Mammon? [1996]; Good Value, Choosing a Better Life in Business [2009]; Reluctant Meister – How Germany’s Past is Shaping its European Future [2014]; The European Identity – Historical and Cultural Realities We Cannot Deny [2015]; Brexit and The British [2017]; The Human Odyssey [2019].
Stephen Green is married with two daughters.