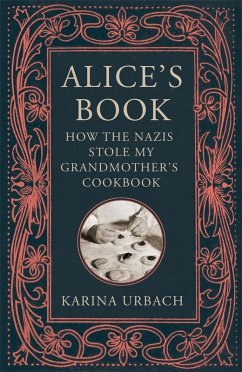 In 1939 the unknown author Rudolf Rösch published a cookbook about Viennese cuisine. SO KOCHT MAN IN WIEN! was a bestseller and is still available today. But Rudolf Rösch had never written this book. Indeed, he may never have existed; a conveniently fictitious product of the Nazi era.
The real author was a Viennese Jewess named Alice Urbach. Before the Nazis took over Austria the book had been published
under her own name. Now, eighty years later, the historian Karina Urbach – Alice’s granddaughter – sets out to uncover the truth behind the stolen cookbook, and tells the story of a family torn apart by the Nazi regime, of a woman who, with her unwavering passion for cooking, survived the horror and losses of the Holocaust to begin a new life in England and America.

Karina Urbach is a German historian who received her doctorate from the University of Cambridge, UK. From 2015 to 2021 she was a Longterm Visitor at the Institute for Advanced Study, Princeton. Her most recent books are Go-Betweens for Hitler (2017) and the novel Cambridge 5 (written under the pseudonym Hannah Coler) which won the Crime Cologne Award in 2018.
Her new monograph Alice’s book has been translated into six languages and was made into a documentary for arte/ZDF/ORF in 2022. It will be published in English on 12th May.