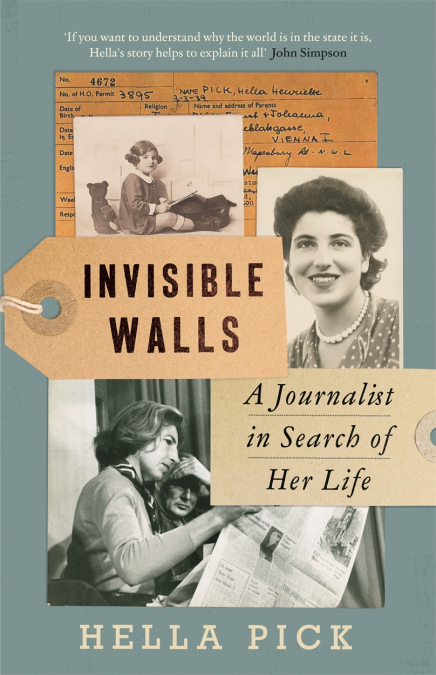 A trailblazer for women in journalism, Hella Pick arrived in Britain in 1939 as a child refugee from Austria. Over nearly four decades she covered the volatile global scene, first in West Africa, followed by America and long periods in Europe. In her thirty-five years with the Guardian she reported on the end of Empire in West Africa, the assassination of President Kennedy, Martin Luther King’s march from Selma to Montgomery, the Vietnam peace negotiation in Paris, the 1968 student revolt in France, the birth of the Solidarity movement in Poland, and the closing stages of the Cold War. A request for coffee on board a Soviet ship anchored in Malta led to a chat with Mikhail Gorbachev. A request for an interview with Willy Brandt led to a personal friendship that enabled her to come to terms with Germany’s Nazi past.

Her book is also a clarion call for preserving professionalism in journalism at a time when social media muddy the waters between fact and fiction, and between reporting and commentary.

INVISIBLE WALLS tells the dramatic story of how a Kindertransport survivor won the trust and sometimes the friendship of world leaders, and with them a wide range of remarkable men and women. It speaks frankly of personal heartache and of a struggle over her Jewish identity. It is also the intensely touching story of how, despite a gift for friendship and international recognised achievements as a woman journalist, a continuing sense of personal insecurity has confronted her with a series of invisible walls.

Of particular interest to friends of the Deutsch-Britische Gesellschaft might be what she says about the importance of the Königswinter Conferences in the book.

The event will be chaired by Rupert Graf Strachwitz, Vice Chairman Deutsch-Britische Gesellschaft.

Hella Pick was born in Vienna, came to the UK on a Kindertransport and has lived in UK since 1939. She is a Graduate of the London School of Economics, was awarded a CBE in 2000, and received an honorary doctorate from Sussex University in 2018.
She was on the staff of the Guardian newspaper from 1961- 1997, working first as UN correspondent, later Washington correspondent, East-West affairs correspondent, Diplomatic Editor, and Associate Foreign Affairs Editor. She has been a frequent contributor to BBC news programs and appearances on German and Austrian TV. She served two terms on the Council of the Royal Institute of International Relations. Since 1998 she has worked a Senior consultant first for Lord Weidenfeld’s Club of Three and after its foundation for his Institute of Strategic Dialogue, where she became Director of the Arts and Culture Programme organising international meetings on political/strategic, economic and arts issues, and also for five years an annual Europe-China Media exchange project. She continues as Consultant to ISD.
Hella has served on the Advisory Board of the German-Jewish Studies Centre at Sussex University for more than 10 years, and on behalf of Lord Weidenfeld was closely involved in the establishment of the Chair of Israel Studies at Sussex University. She is currently acting in an advisory capacity for the establishment of the Sussex University Weidenfeld Institute of Jewish Studies.
She is the author of “Simon Wiesenthal – A Life in Search of Justice” published by Weidenfeld & Nicolson (1996), translated into German as: Simon Wiesenthal – Eine Biographie, published by Rowohlt in 1997. In 1999 the Orac Verlag in Vienna published her book: “Und welche Rolle spielt Oesterreich“ and published in 2000 by IB Tauris as „Guilty Victim – Austria from the Holocaust to Haider”. Her latest book, ‘Invisible Walls – a Journalist in search of her Life’ was published in March 2021 by Weidenfeld&Nicolson.
Hella Pick has been awarded honours by the UK, and Austria. In 1988 she received the Goldenes Ehrenzeichen der Republik Oesterreich. In 2000 she was made a CBE, and was also awarded the Grosses Verdienstkreuz des Verdienstorden der Republik Deutschland. She received an honorary Doctorate from Sussex University in 2018.