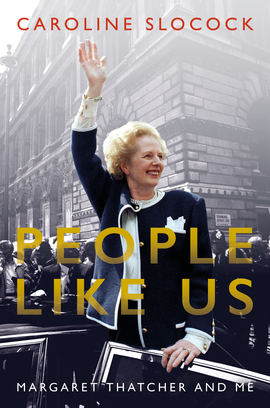 Margaret Thatcher is not an obvious choice for a discussion on feminism and politics. Yet Caroline Slocock’s book „People Like Us: Margaret Thatcher and me“, in which she recounts her time working as the first ever female private secretary at No. 10 to any British Prime Minister, argues that the way we see her is itself misogynistic, from the Iron Lady to the many images of her as a witch or a man, and that this negative portrayal of powerful women in the UK and the USA continues to this day. Thatcher herself had mixed feelings about women and was full of contradictions. She didn’t like ‘women’s lib’ but nonetheless wanted to see more women in power. At the same time, it was said of her that she did not like to hire women and was comfortable being surrounded by only male politicians and senior staff.

Nevertheless, she faced countless acts of misogyny on her rise to power, such as being called “that bloody woman” by her former boss, Prime Minister Ted Heath. Slocock even argues that the high profile resignations from her Cabinet that led to Thatcher’s downfall were partly fuelled by her gender. Had she been a man, it would have ended differently, she says.

How can feminists see Margaret Thatcher? Did she (maybe unconsciously) help advance women’s rights or are these actions outweighed by the damage she did? What was it like to be working for her as a left-wing civil servant? And have things changed in British politics and society in general since Thatcher stepped down?

Caroline Slocock was the first ever female private secretary at No. 10 to any British Prime Minister and was Private Secretary (Home Affairs) to Margaret Thatcher and John Major between 1989 to 1991. Her job involved her working closely at Margaret Thatcher’s side for the final eighteen months of her premiership. A left-wing feminist, Slocock was no natural ally – and yet she became fascinated by the woman behind the ‘Iron Lady’ façade. She kept a diary and used this to help her write People Like Us: Margaret Thatcher and Me, which was published in April 2018. This reflects not just her experience of Margaret Thatcher during those turbulent last days but also her subsequent experiences of the challenges facing women in their working lives.
After leaving No. 10, she worked to change the culture and working practices of the Treasury, which many women saw as a barrier to their advancement, and went on to reform the public expenditure system and public services. At the Department for Education and Skills, she oversaw a national expansion of childcare and nursery education. Between 2002 and 2007, she was the chief executive of the Equal Opportunities Commission, the statutory body that promoted equal opportunities for women and men, and helped achieve significant advances, though many challenges remain.
She currently runs a think tank and a leadership network dedicated to improving services and strengthening communities. She is the author of many publications on this theme and is a regular commentator in the media.
She lives in London and Suffolk and is married to the crime writer John Nightingale, with whom she has two daughters.