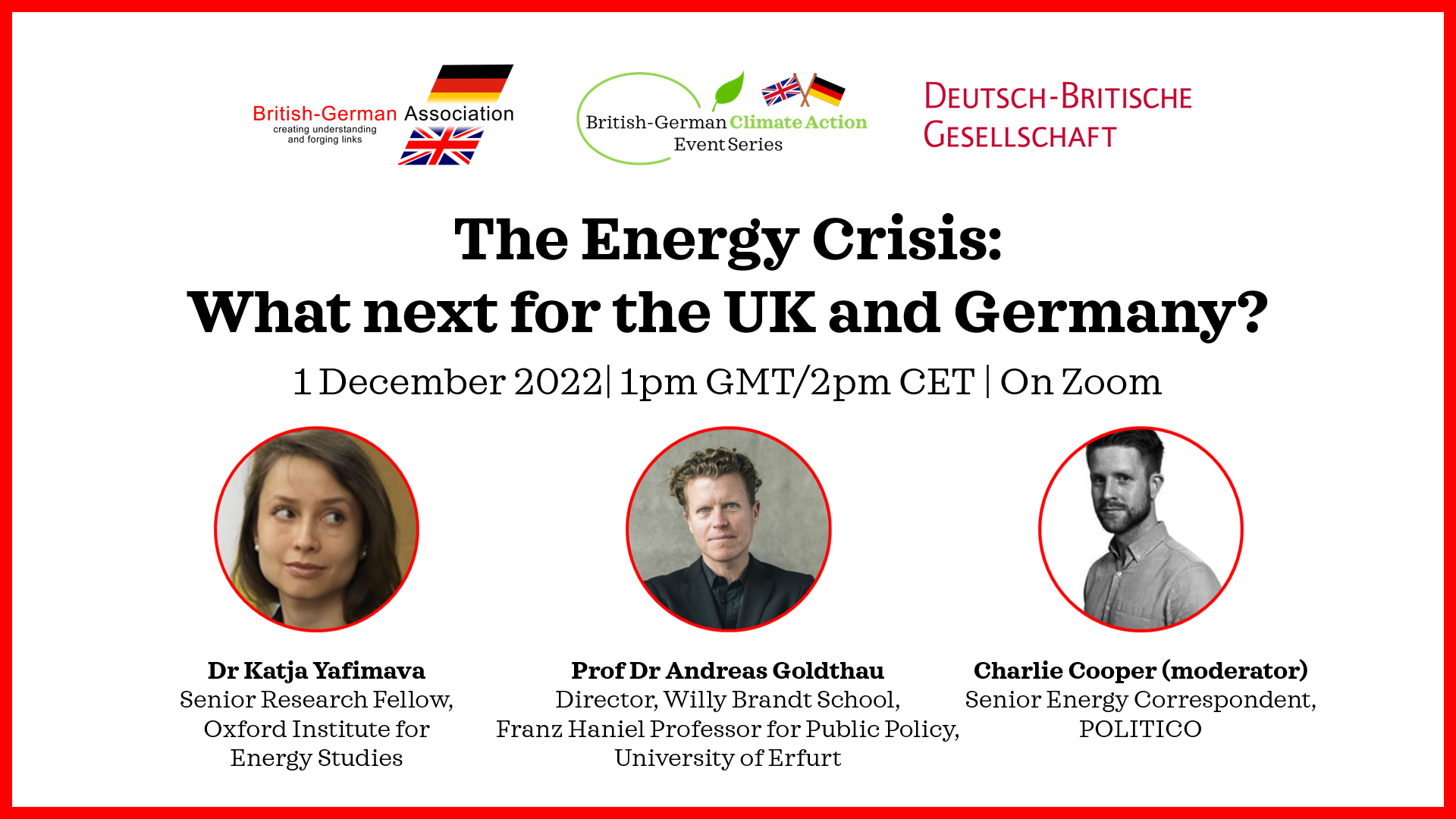 Join us on 1 December 2022 at 1.00pm GMT/2.00pm CET on Zoom for a discussion between Dr Katja Yafimava, Senior Research Fellow at the Oxford Institute for Energy Studies, and Professor Dr Andreas Goldthau, Director of the Willy Brandt School and Franz Haniel Professor for Public Policy at the Faculty of Economics, Law and Social Sciences, University of Erfurt. The discussion will be moderated by Charlie Cooper, Senior Energy Correspondent at POLITICO.
Together, the speakers will discuss the two countries’ approaches to the energy crisis and ask: how well prepared are we for the upcoming winter, and the next one? Which learnings have been made and how have they impacted the UK’s and Germany’s efforts towards Net Zero, especially with the results of the recent COP27 in Egypt?

This event is part of our British-German Climate Action Event Series, organised jointly by the British-German Association (BGA) and the Deutsch-Britische Gesellschaft.

Please note that registration is necessary in order to join the event. You can register on the following link: https://us06web.zoom.us/webinar/register/WN_nosaCNnlShKCEsvzkvmUKw

Dr Katja Yafimava is Senior Research Fellow at the Oxford Institute for Energy Studies. She holds a D.Phil. in Geography and an M.Phil. in Russian and East European Studies from Oxford University. Dr Yafimava has been an expert at the UNECE Group of Experts on Gas since January 2015 and was an expert at the EU-Russia Gas Advisory Council during 2012-16. She has also written for Carnegie Moscow Center, German Institute for International and Security Affairs (SWP) and Italian Institute of International Affairs (IAI) as well as commented for various international media. Her main research areas include EU pipeline gas and LNG regulation, regulation of decarbonisation, and transit security of Russian gas exports to Europe.

Professor Dr Andreas Goldthau is Director of the Willy Brandt School of Public Policy, Franz Haniel Professor for Public Policy at the Faculty of Economics, Law and Social Sciences, University of Erfurt, and Research Group Leader at the Institute for Advanced Sustainability Studies. Before joining the Brandt School, he served as Professor in International Relations at Royal Holloway College, University of London and as Professor at Central European University’s School of Public Policy. His academic work centres on energy security and the global political economy of the low carbon transition.