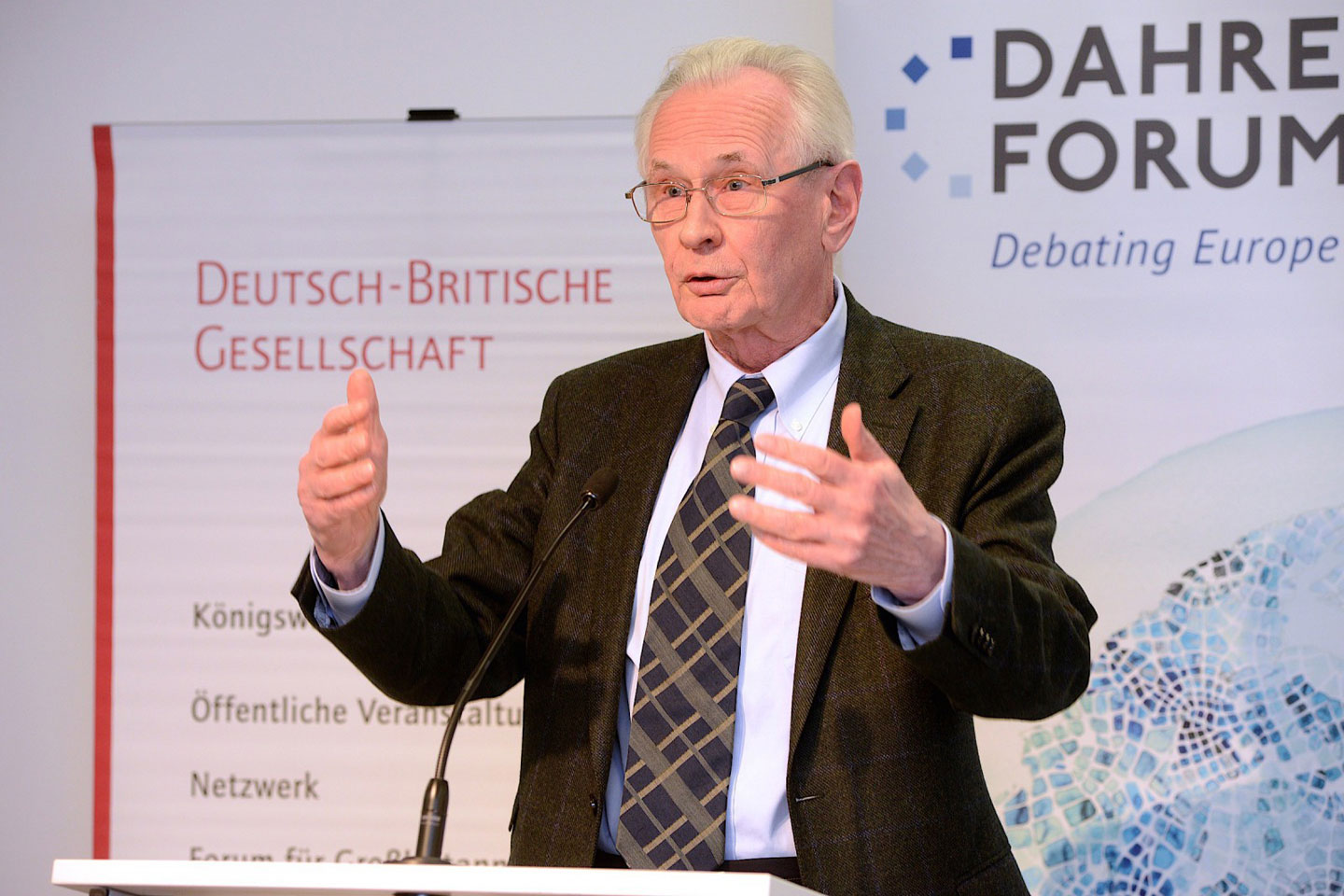 Prof Grimm pointed out that there are two kinds of legitimacy for the EU. Initially, legitimacy was established through the sovereignty of the member states (“external legitimation”) working together in the European Council while the parliament had an advisory function. When in 1979 the EP was for the first time elected directly, this was the start of the “dual legitimacy”; the EP creating “internal legitimacy” for the EU.
Photo: Prof. Anheier, Prof. Grimm, Dr. Graf Strachwitz
© Dahrendorf Forum/Oliver Hein

This internal legitimacy is in crisis, but not because the European Parliament (EP) does not have sufficient power. In fact, statistically voter turnouts declined whenever the EP’s powers were extended. According to Grimm, the central problem is that the elections for the EP are national, not European elections. National candidates of national parties campaign with national topics and agendas according to national election laws. Currently, around 200 different national parties have seats in the EP. Only after the elections, they form factions/parliamentary groups which then set a European political agenda. This missing link in campaigning and agenda setting causes problems of accountability and legitimacy.

A less noted development occurred through two judgments of the European Court of Justice (ECJ) in the early 1960s: The court decided that EU law would be directly applicable in member states and that it would take precedence over national law in cases of collision – the question of compatibility being subject to ECJ jurisdiction. As a consequence, the European treaties were “constitutionalised”, i.e. they were de facto upgraded to a constitutional level by the ECJ. The problem Prof Grimm pointed out is that the treaties were never meant to have this status and therefore are not designed accordingly. Instead, they are a lot more extensive than a constitution should be.

“The more ordinary law in a constitution, the less democracy.”

This caused problems for the legitimacy of the EU. While political integration stagnated, legal integration was pushed forward through ECJ jurisdiction. As the common market was the centrepiece of the treaties, the four freedoms attached to it became “super fundamental rights”, protected by the ECJ. What lies at the heart of Prof Grimm’s thesis is this: The upgrade of the European treaties to constitutional level have overburdened the process of European integration unintendedly and unnecessarily.

Strengthening the powers of the EP means the EU would have to rely even more on its internal legitimacy – which is not a very promising approach given its constant crisis and the above stated reasons for it.

What can be done?

Prof Grimm drafted three major recommendations to improve the legitimacy problems of the EU and its institutions: