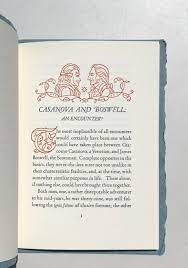 By a very strange coincidence, Casanova (1726-1798) and James Boswell (1740-1795) were both in London during 1762-1763. At the time Boswell was a raw and gauche young man, while Casanova had already lived life very fully before reaching England.

Boswell, a Scot, lawyer, and libertine, hoped to become an officer in the army. His father successfully prevented this. Later in life Boswell was to write one of the most famous of English biographies, the subject being Dr Johnson who created the first dictionary of the English language, a man whose pithy conversational brilliance was to be preserved by James Boswell.

The texts from which passages have been selected are, for many reasons, extraordinary. Both disappeared after the deaths of their authors. The Casanova memoirs first came out in a poor German translation in the year 1828. Only in the course of the last century was a version published which does justice to the style of the original. Boswell’s London Journal was discovered in the nineteen forties and first appeared in 1950, nearly two hundred years after being written.

Neither text was intended for publication. This is important, in that most autobiographical writings tend to leave out indiscretions, or aspects of character which their authors feel might lead to negative reflections on the part of later readers. Both of these texts are self-revealing in the extreme.

The texts were selected and arranged by Jo Rippier.